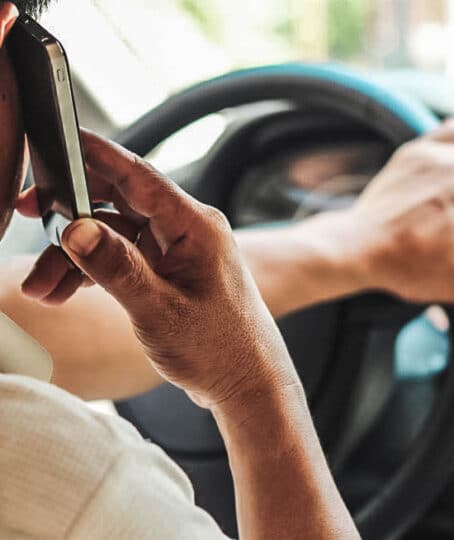 What Are the Three Types of Distracted Driving

Visual distractions are activities that cause the driver to cease looking out of the windshield or paying attention to where he or she is going. Examples of activities in the visual category of distractions are watching YouTube videos, reading a text or social media post, searching for something in a purse, or looking into the mirror to groom hair while driving.

Activities such as texting, sending emails, talking on the phone, and personal grooming involve two or more types of distractions. As such, these and other, similar activities carry a higher risk of causing a distracted driving accident.

Sending a text message, for example, requires the driver (1) to visually look away from the road, (2) to physically remove one or both hands off the wheel to pick up the phone and type, and (3) to think about the text message that he or she received and what he or she might send in reply. The driver’s response time is impaired because the driver is visually and mentally unaware of what is happening in front of the car (e.g., whether the car is veering into the oncoming traffic lane) for however long he or she is reading and writing the text messages, and, in either case, he or she has one or no hands on the wheel with which to maneuver the vehicle. For these reasons, states such as Illinois have banned the use of cell phones while driving.

Proving Negligence When Injured by a Distracted Driver

Negligence is a legal theory by which victims may recover for harms done to them under civil law. In this context, “civil” means illegal acts that are part of a civil lawsuit brought by the injured party, rather than a criminal charge or lawsuit brought by prosecutors. There are circumstances in which illegal acts can be both criminal and civil in nature, such as in car accident cases. A car accident lawyer represents victims of car accidents, such as those accidents caused by distracted driving.

Negligence has four parts: duty, breach of duty, causation, and injury. There are two general types of negligence: (1) negligence and (2) negligence per se.

In the context of distracted driving, negligence may operate as follows: Driver A owes other drivers, such as Driver B, a duty to act reasonably and responsibly while driving. If Driver A is texting while driving in Illinois and causes an accident with Driver B, Driver A breaches that duty. If Driver B is injured or Driver B’s car is damaged in the accident caused by Driver A, then Driver B may have a negligence claim against Driver A. To prove his or her case, Driver B might emphasize that texting involves more than one type of distraction, as discussed above, making it especially dangerous to do while driving.

Under the negligence per se standard, victims of car crashes may have less of a burden of proof if they can show that the at-fault driver broke a law, and that the victim is part of the population intended to be protected by the law. The duty owed by Driver A is to follow the law, and the breach is the breaking of the law while driving. The victim may then prove damages and that the driver caused the damages.

When to Hire a Distracted Driving Attorney

Victims of car accidents are encouraged to get a lawyer after an auto accident after receiving appropriate emergency medical care. Getting a distracted driving attorney can help set victims up for a successful case because these types of attorneys typically are better equipped to have investigations done of the crash scene. These types of investigations can uncover evidence that may not otherwise be available to the victim, such as truck logbooks.

Questions to Ask When Hiring a Truck Accident Lawyer

If you have been in an accident with an eighteen-wheeler and need legal representation, knowing what questions to ask when...

Distracted driving may be considered negligence, depending on the type of distraction, the law of the state in which the...